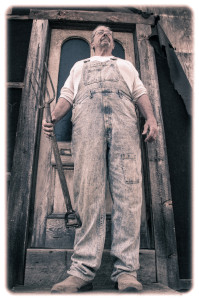 Say the word "pruning" and most gardeners conjure up images of shaping arborvitae hedges with electric clippers. Or perhaps they envision trimming an apple tree.

I look at "pruning" as an art form that not only helps the environment of your garden, but creates a beautiful landscape at the same time. They don't call me "Richard Scissor-Hands" for nothin'!

Here at the farm I have been pruning the native trees and shrubbery for many years. I particularly enjoy working with hemlock and beech trees, as their fast growth habit makes for a quicker result visually.

Creating shapes from native trees takes time and patience but the rewards are many. For the organic gardener, the attraction these plantings have for songbirds is a primary benefit. Not only are you creating cover and nesting sites to attract these lovely birds, they in turn thank you by eating a lot of harmful insects and giving free concerts!

Another benefit of pruning is what I term the "winter garden" that is created. As the bleak landscape of the long winter season here unfolds, you start to see the defined shapes of the pruned trees. Instead of flowers and foliage to gaze at, you have a "garden of form" to attract the eye.

Pruning is not difficult, but it is time consuming. You must look at the long picture. It can take several years to define your native "topiary" into a form that is appealing.

Native hemlock trees are perhaps the easiest to form. They are very tolerant of pruning and branch and fill out rapidly. I have experimented with young trees and old here at the farm, with very different results. By topping a more mature tree, then gradually shaping the lower branches, you can end up with an "umbrella" tree. The one in our front yard is a lovely place to stand under and gaze at the summer garden - you don't get wet if it's raining and it's thick shade is a cool place to retreat to on a hot day.

Penny often chuckles at our "Dr. Seuss" tree in the far garden. I created it from a moderate sized hemlock by removing the top and several of the lower branches. I then trimmed all the foliage from the center, leaving "tufts" of foliage at the ends of the branches. Over time and with a bit of trimming, the "tufts" have filled out and created an oriental look that is very startling in winter. Young hemlocks are easily pruned into hedges or shaped gradually into more whimsical forms.

The native beech and oak trees are also easily pruned. Where a larger tree has been removed I simply allow the "suckers" to grow from the old roots. These in turn can be shaped into unique forms by gradually removing unwanted growth and some attentive topping and trimming. This young growth can also be attractively twisted or braided together (do this while the leaves are off) to create unusual trunks over time.

The beech trees hold their leaves into the winter and give a touch of relief to a drab landscape.

A good strong pair of pruning shears is a must for this project, as well as lopping shears (for heavier growth) and an over-head saw is very helpful to reach higher limbs as time progresses. Plan to spend time on this project. I like to wander in the fall garden, shears in hand and take a good look at the forms. Think about what you would like to do with this plant. Envision what it will look like five years from now. Then start to trim, just as you would a house-plant, cutting back to signs of new growth to create branching or removing branches that "cross" to promote the health of the shrub.

Have patience. Plan ahead. Take the time to stand back and view the tree. Work with what nature gives you, rather than forcing a form. The rewards are not immediate on this type of project, but I promise that you will enjoy your native shrubs for many years to come.

would never weary of keeping a garden.

Every gardener has that day when he wonders if it "is all worth it?". Perhaps it's the aching muscles following a day of preparing the soil and turning compost that initiates this thought. Or a conversation with a friend who in an off hand comment states that the time you spent in the garden could be better spent making some $'s at a part time job, or recreating somewhere.

Then there's always the pragmatist who adds up all the hours of labor involved in seeding, planting, cultivating, nurturing and finally harvesting a crop, converts those hours into $'s and then tells you how much cheaper it is to simply buy at the market. Perhaps it's the late frost that caught you unaware or the beetles that ate your prize roses that makes you throw up your hands to the heavens and wonder "is it all worth it?".

It happened to me just this past month. While staring out upon the garden, the raised beds merely shapes under two feet of snow, I was taken by a wave of melancholy so sudden I sought out the nearest chair. Before long I was wondering if the path I chose was worth it? What caused me to feel like this? Did I regret losing time for recreating? No. Was I keeping a garden to save money on groceries? Certainly not. Was I discouraged over losing a crop? No. If I didn't have failures, how else would I learn?

You're getting older, I told myself. You're not as strong as you used to be. The muscles ache more and more every year. It's only going to get worse in years to come.

Then I thought about my father's garden. He talked about reducing the size of his garden for years, but it didn't happen. He'd say that he "won't keep much of a garden this year", but I knew it would be just as large. He'd curse the spring mud 'cause he couldn't plant yet, and he'd brush the snow off the escarole before he cut it just as he did for decades.

Then I realized that I, like my father, would never weary of keeping a garden.

There's that bonding of the human spirit with the spirit of the earth that takes place when keeping a garden that no amount of bodily discomfort can diminish.  The kind of labor that at the end of the day you can look upon, see what you accomplished and feel like a good husband to the earth.

Is it all worth it? You bet. In fact, for me, it's essential. This whole while, it was just February making me feel funky.

Below is an excerpt from the Lebanese poet, Kahlil Gibran, who speaks to my heart.

...Always you have been told that work is a curse and labour a misfortune.

But I say to you that when you work you fulfill a part of earth's furthest dream assigned to you when that dream was born,

And in keeping yourself with labour you are in truth loving life,

And to love life through labour is to be intimate with life's inmost secret.

...Often have I heard you say, as if speaking in sleep, "He who works in marble, and finds the shape of his own soul in the stone, is nobler than he who ploughs the soil.

And he who seizes the rainbow to lay it on a cloth in the likeness of man, is more than he who makes the sandals for our feet."

But I say, not in sleep but in the overwakefulness of noontide, that the wind speaks not more sweetly to the giant oaks than to the least of all the blades of grass;

And he alone is great who turns the voice of the wind into a song made sweeter by his own loving.

Work is love made visible.