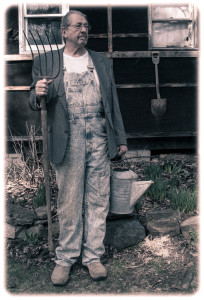 As another growing season comes to a close, one of the major garden chores is the cleanup. All the spent plants are brought to the compost for use the following season when it will be returned to the soil. Perennials such as lavender, southernwood and sage are cut back to ground level, where next year's growth is evident on the old wood. What Penny doesn't use on her craft work also goes to the compost. Old squash vines, tomato plants, pepper plants - everything organic goes to the compost.

At first, Penny didn't understand my diligence in gathering organics for compost. She would throw her eyes skyward as I stopped the car at roadsides to put bagged leaves into the trunk. When I berated her for throwing egg shells and coffee grounds into the trash, she was sure I was obsessed. Now, however, Penny is equally diligent for she is schooled in the natural order.

How does one learn such things? By simply being still and observing. For instance, let me relate a recent occurrence. I was gathering together spent plants when I heard the geese overhead. My back needed stretching, so I stood erect and watched a large misshaped "vee" formation of Canada geese split and form two perfectly shaped "vee" groups directly overhead. As my entertainment was passing, a gust of wind drove a leaf so hard against my reddened ear that I "ouched" out loud. This brought my attention to the hundreds of leaves being loosed by the wind and brought to the earth where they were really starting to pile up. The forest floor was thick with them. My wondering brought me to ask where all the leaves went by summer's end. Well, they're eaten, of course. The leaves are actually consumed by a multitude of living things, ranging in size from microbes to earthworms. The leaves then become part of a soil that nurtures the trees above. It was at this point that I realized I was being given a lesson in organic gardening. These oak and pine are some of the largest plants on earth, but they sure don't need any 5-10-5.

When a tree breaks dormancy, the sap flows through its roots deep into the earth and gathers nutrients, delivering them high above to the new growth of leaves. Later the leaves fall. The leaves enrich the soil, the soil feeds the tree. Simple? You bet. I don't need to understand the processes by which organic compounds are broken down or altered. I leave that to those that it interests. My lesson has been this: when living things die they are returned to the soil, which is enriched and may now sustain new life. Simple.

I recall once reading how rains can leach nutrients from the topsoil into the subsoil so deep that they become "lost" or unavailable to plants because their roots just don't reach them. When I think of the depth that a large tree's roots reach into the earth, I realize how much of those "lost" nutrients are recovered and how nutrient laden leaves must be.

Our neighbor has just offered us his leaves again this year. Judging from the size of his place and the size of my truck, this will require numerous trips. Oh well, the thyme can be cut another day. Priorities. Some people shake their heads when they see me stockpiling leaves. I shake mine when I see people burning them.

A few lines from a favorite poem by Robert Frost come to mind.

"..I may load and unload

Till I fill the whole shed,

And what have I then?

Next to nothing for weight:

And since they grew duller

Next to nothing for color.

Next to nothing for use,

But a crop is a crop,

And who's to say where

The harvest shall stop?" 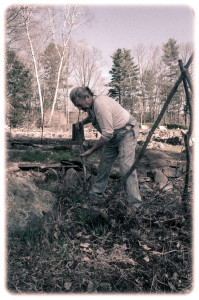 As I watch the last of the golden leaves swirling on the wind, I can't help but think to myself what "gold" indeed they are. For years they have been an integral part of my compost, a harvest of nutrition.

I learned about leaves from the forest. Look at the forest floor this time of year, deep in it's carpet of leaves. This is the very building block of the rich soil needed for healthy trees. The forest feeds itself. Each year nature adds another layer of nutrition. Though it takes many years for nature to break down the leaves into useful nutrients, the gardener can speed up the process.

As a charter member of "Leaf Thieves of America", I used to cruise the streets of town in the fall, watching for those carefully bagged up packages of "gold" placed by the curb. I'd toss them into the truck and be off with my treasure. I made huge piles of compost and waited patiently for wonderful "black gold" to appear at the bottom of the pile. This rich humus was then added to the garden soil.

Nowadays we have folks who are happy to contribute their leaves to our effort. Our neighbor  has a "bagger" machine that even shreds them nicely for us. Word has spread, "Richard wants your leaves!" and now quantities of leaves are delivered directly to our compost area by neighbors who are only too happy to oblige.

Over the years I've discovered a new method of using leaves. Each fall I shovel the outer edges of our growing beds into the center, then fill in the sides with chopped leaves. More leaves are spread over the tops of the entire bed. This fall covering of leaves will also help to protect the soil from winter wind erosion.

In the spring, I simply rake off the centers of the beds to expose the soil to predators like robins who will clean up any pesky insects that have over wintered. The leaves left on the edges of the beds will decompose quickly and become a wonderful mulch and compost. This method also prevents invading grasses and weeds from getting a strong foothold in the growing area. They are easily pulled out of the fluffy mulch.

Now admittedly, this method does create a perfect environment for some pesky critters like moles to travel through, but I've found the benefits far outweigh the problems involved. This was especially true this past growing season when drought destroyed many gardens. With some judicial watering, our humus rich soil held the precious moisture and there was plenty of mulch at hand. Our gardens thrived.

I've taken a lesson from the leaves. With all the hustle-bustle of a busy world, what better teacher than nature? What other free resource provide us with shade from the hot sun of summer, glowing beauty in the fall and then the perfect building block for rich soil?

I think I'll just put down the garden fork for now. The days are growing shorter and the garden is nearly to rest. Another flock of geese is honking their way south overhead. I'll pour a glass of cider and watch the last of the maple leaves swirling down onto the garden.