Learning From Nature's Calendar and the Funky Blossom

Having transplanted from a densely populated area on the Connecticut shoreline I observed a great number of differences when I settled here in rural Fort Ann. Among the most dramatic was the demeanor of the people.

Surprisingly, the one change of venue that most effected me was the wildflowers. Of course I grew up familiar with the "weeds" of vacant lots like chicory and mullein and the flowers of the fields like daisies and daylilies, but I was struck by the awesome array of bloom that was all about me when I settled here.

I was particularly taken by the woodland wildflowers, so I bought a book to begin identifying them. Not satisfied with that book I bought others until I found "Newcomb's Wildflower Guide" which I've used for 15 years now. I became an enthusiast. I tried Penny's patience when travel was constantly interrupted because I had to pull over and identify some unknown blossom.

Over the years I've become so familiar with the wildflowers that their blossoming marks a season and foretells other events of nature's cycle and vice versa. When I hear the first peepers of the spring I know that the hepatica has begun its bloom, and when I see those first chickweed blossoms in the garden beds the phoebes will be back any day. The blossoming of the wildflowers is nature's calendar. Come on along and watch spring unfold through the wildflowers.

Trailing arbutus and hepatica are the first signs of spring bloom here at the farm, but a walk to a swampy area nearby reveals the funky blossom of the skunk cabbage. A few days later coltsfoot, which is often mistaken for dandelion, will begin its bloom. Coltsfoot, like skunk cabbage, blooms first then the leaves come later. The ice will be going out now on the local ponds and the juncos will arrive.

Now the bloodroot begins its bloom. Such a lovely white flower gently protected from harm by that single wrap around leaf. Other flowers begin to bloom rapidly now. It seems that just about every day something new has happened. Monday - Dutchman's britches. Tuesday - trout lily. Wednesday - periwinkle. Thursday - ground ivy. Friday - dead nettle. Saturday - trillium. Sunday - violets and cowslip. All this quickening as April goes into May also means the emergence of those oh-so-loved woodland denizens.......black flies.

Now is the time that we suddenly notice that we can't see that ridge any more for the woods are a sea of green. So many shades of green.....a challenge for any artist. A walk to the woods edge reveals the first toothwort has blossomed. That tells me to go to the asparagus patch for the first spears will be appearing.

There's a small clump of miterwort just beginning its bloom. It's such a tiny white blossom which at close inspection reminds me of a snowflake. I always mistake it for foamflower which is more common around here and blooms just shortly afterwards. As a matter of fact, just over there is a patch of foamflower budding up but not quite ready to flower. When it does flower, right about the same time as gay wings and wild oats, it is time to expect those other tormentors, mosquitoes, to be out in force.

Soon the celandine with its golden juices and bright yellow flowers and deep green leaves will herald the arrival of the wood thrush whose flute like "poh-tee-weet" will serenade us for many evenings to come.

Then the mid may blossoms of winter cress that turn farm fields yellow and jack-in-the-pulpit that bring hikers to pause will lead us into June. Clintonia, tower mustard, dame's rocket, bedstraw, bluets, harebells, dogwood, and on and on to those flowers of summer.....the chicory and mullein.....the daisies and daylilies.

More than just something pretty to look at, they all represent a season. Nature's calendar.

Spring Garden and a Time for Singing 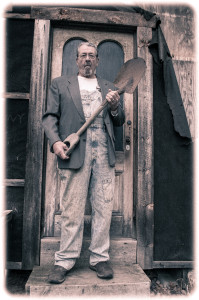 "Lo, the winter is past, the rains are gone... the time for singing has come." This centuries old bible quote reflects the attitude of millions over the ages. Spring has at long last arrived. Yeah!

The arrival also brings the mountains of garden chores to be done. The earth must be made ready for planting. The mulch must be removed from the garden beds to allow the soil to warm. The new sprouting cover crops must be turned under. The compost must be turned and sifted. The perennials must be lifted and divided.

Such work seems endless, but here at the farm it is done gladly and thankfully. for in every moment the wonder and mystery of nature unfolds. Not one leaf can be raked from a garden bed without revealing an earthworm or spider or some other tiny creature going about its spring chores. Robins gather remarkably close by, eyeing the bounty spread before them as a cover crop is turned under. As a piece of windblown cardboard is lifted, a wildly wriggling eft searches for new cover under a blossoming hepatica.

A dark cloud hides the warm spring sun and sends this gardener searching for the shirt he shed earlier. Its over by the compost and so is a robin, playing tug-o-war with a piece of string embedded in the soil. The robin prevails and I follow its flight to what may be its nest sight. I file that though away as I'm distracted by a commotion over by the leaf pile. A group of white throated sparrows are rustling amongst the leaves in their curious manner of leaping forward on both legs and immediately back again on both legs, throwing up leaves behind them. They look like they are doing the alley-cat at a wedding reception. This brings a smile and a chuckle and I feel good to be alive. Such is a spring day in the garden.

Such is the spirit of organic gardening. The work that could be burdensome and laborious is really satisfying and fulfilling, for it is in harmony with the natural order.

Spiritualists may call this being in tune with the Oneness of all creation. I haven't a name for it, just a sense of belonging to all I see about me, and the garden is the place to feel it and experience it. It is in the garden where one can visualize the entire earth as a single living organism and we humans as just a minute part of it. It is in the garden that we can become more mindful of our actions toward the whole and realize that our survival depends on our ability to live in harmony with the whole, not in trying to dominate it.

Once we discover that we are only part of the process of nature, then we can learn our own inner nature from nature itself. The garden is the place to be and Spring is a most wonderful time to be there. The time for singing has come.